in General MLB, The Half Street High Heat Blog
0 0
A A
0
0
SHARES
62
VIEWS
Share on FacebookShare on Twitter

Today we reveal our #8 team in the Top 10 teams of the 2010s to not win the World Series. The teams considered all had outstanding seasons but failed to win the World Series. Many failed to even win a single playoff series. For some teams, such as the ’16-’17 Nationals and the ’18-’19 Dodgers, we’ve doubled up the seasons due to the similarities in each team and to ensure that we didn’t include any franchise more than once in this list.

The 2014 Los Angeles Angels were not expected to win the AL West. Some experts and pundits predicted them to potentially contend for a Wild Card but believed the Oakland A’s and Texas Rangers were stronger contenders for the division. Texas would go 67-95 while the A’s would go toe-to-toe with the Angels until mid-August before finishing 88-74 and 10 games back. The Angels would lead MLB with 98 wins and earn the #1 seed in the American League playoffs.

With Mike Trout and Albert Pujols leading the lineup, the question as to the validity of the Angel’s postseason hopes laid with the pitching staff. The rotation and bullpen answered that question in an emphatic way with perhaps the best pitching performance Orange County had seen in the past 32 years.

They would be swept out of the playoffs in the ALDS by the Kansas City Royals in three games. It was an embarrassing showing by a team that believed they were the favorite to win the World Series. It has been Mike Trout’s only playoff appearance to date, and the memory of that playoff performance tarnishes not only the 2014 team’s legacy, but the legacy of the greatest player of this generation.

Let’s start by looking at the nine guys who featured the most in their lineup:

This is a really decent lineup for the Angels, but unfortunately, they really didn’t have too much beyond these 9 guys.  Collin Cowgill was their biggest bench piece with 293 plate appearances while Hank Conger, the back-up catcher, chipped in with 260 plate appearances. 42-year-old DH Raul Ibanez was a flop, hitting .157 in 57 games for the Angels. There was zero depth beyond their starting 9 and if they’d had a little more, they almost certainly would’ve won 100+ games.

The lineup featured two All-Stars in Mike Trout and Erick Aybar, though Albert Pujols, Howie Kendrick, and Kole Calhoun were productive providers of offense. Rookie CJ Cron didn’t debut until May 3rd, and only played sporadically over the season, accumulating just 253 plate appearances. Josh Hamilton only played in 89 games, while David Freese underperformed in his 462 AB’s.

The lineup and Mike Trout is what many people remember about the 2014 Angels, despite not winning even one postseason game. But it was their pitching that was the reason they were good. Their 3.58 team ERA was the second lowest in franchise history since 1989.

Let’s take a look at their top 6 starting pitchers and top 5 relievers below: 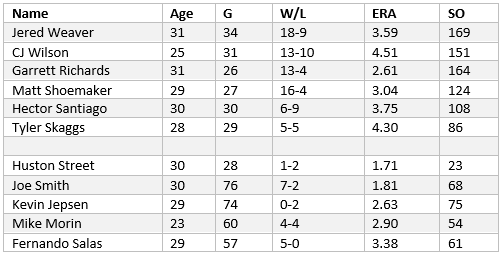 Huston Street was acquired at the trade deadline from the Padres, and the All-Star closer didn’t disappoint. CJ Wilson had a down year, but was significantly better at home, going 9-2 with a 3.82 ERA. While Jered Weaver was the unquestioned ace of the staff, it was Garrett Richards and Matt Shoemaker who had outstanding seasons. And the pitching staff as a whole had the second lowest WHIP in franchise history (1.221) and the lowest runs allowed per game (3.89) since 1989.

And though the Angels were swept by the Royals in the ALDS, the first two games each went to extra innings before the bullpen let them down. Kevin Jepsen, after pitching in 74 games in the regular season, took the loss in Game 2 and gave up a run in Game 3. Fernando Salas took to the loss in Game 1.

The Royals would go on to lose the World Series in 7 games to the San Francisco Giants but would win it all in 2015. They were a team of destiny, while the 2014 Angels were simply an obstacle for them to overcome. Perhaps if they’d won just a single one of those two extra innings games, it might have been different, but alas, it was not to be.

How to Fix Josiah Gray