Today we reveal our #7 team in the Top 10 teams of the 2010s to not win the World Series. The teams considered all had outstanding seasons but failed to win the World Series. Many failed to even win a single playoff series. For some teams, such as the Nationals and the Dodgers, we’ve chosen just one of their great teams to ensure that we didn’t include any franchise more than once in this list.

The 2016 Washington Nationals won 95 games and had 6 members of their lineup hit over 20 home runs. Max Scherzer won the NL Cy Young and the Tanner Roark went 16-10 with a 2.83 ERA. They’d end up losing in the NLDS in 5 games to the Los Angeles Dodgers. But as good as that 2016 team was, it was the 2017 team was arguably Washington’s best.

The 2017 Washington Nationals went 97-65 and won the NL East by 20 games. They were in first place from April 16th onwards and were never under .500. They’d finish second in the NL behind the Dodgers and host the defending champion Cubs in the NLDS. Despite a gritty Game 4 performance by a flu-ridden Stephen Strasburg and a game clinching grand slam by Michael A. Taylor, the Nationals would fall once again at home in a wild Game 5.

Let’s start by looking at the nine guys who featured the most in their lineup:

This lineup features three All Star starters in Ryan Zimmerman, Daniel Murphy, and Bryce Harper. All three of those guys and Anthony Rendon hit over .300 that season. Trea Turner struggled a bit due to injuries, but Michael A. Taylor had the best season of his career while playing gold glove caliber defense in center field. But what separated this 2017 team from previous Nats teams was its bench depth.

Adam Lind played in 116 and hit .303 with 14 bombs and an .875 OPS. That means the Nats’ first basemen that season hit .303 with 52 home runs and 167 RBIs. Brian Goodwin added 13 home runs and an .811 OPS in 74 games, while even Wilmer Difo contributed by batting .271 in 124 games. And we can’t forget about Howie Kendrick, who was acquired at the trade deadline and hit .343 with 7 home runs and 25 RBIs in 52 games. Perhaps if Dusty Baker plays Howie Kendrick over Jayson Werth in the playoffs, the Nationals win the World Series two years earlier.

This lineup was outstanding and led the NL in slugging and OPS, despite key injuries to Adam Eaton, Trea Turner, and Bryce Harper (who still had a monster season). But what everyone most likely remembers about the 2017 team was the lights out rotation and awful bullpen. Let’s take a look at their top 6 starting pitchers and top 5 relievers below: 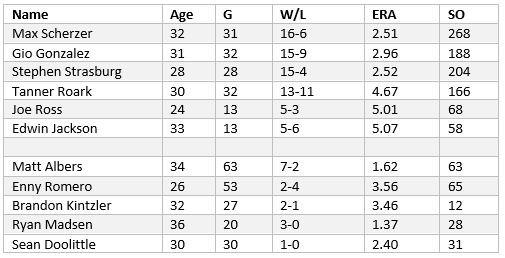 Max Scherzer won his second consecutive NL Cy Young and amassed 7.5 WAR. Strasburg went 15-4 with a 2.52 ERA in 28 starts while Gio Gonzalez had his best season since 2012, and perhaps should’ve been an All Star. That three-headed monster would finish 1st, 3rd, and 6th in the final Cy Young voting. Roark and Ross would have their highs and lows at the back end of the rotation, while Edwin Jackson returned to DC to provide depth.

As good as the rotation was, the bullpen for the first half of the season was terrible, which is a familiar theme for the Nats over the past decade. After failing to re-sign Mark Melancon in free agency, the Nats turned to breakout reliever Blake Treinen to be their closer. He struggled mightily in that role, going 0-2 with a 5.72 ERA in 37 games. He managed to get just 3 saves.

At the deadline Mike Rizzo acquired Ryan Madson and Sean Doolittle from the A’s and Brandon Kintzler from the Twins. Thus, the law firm was founded. Kintzler, Madson, and Doolittle immediately stabilized the bullpen and came with multiple years of team control. Doolittle was lights out as the closer and would be an All Star in 2018. Madson was the perfect set-up man and had a 1.37 ERA in 20 games with the Nats. With the best slugging lineup in baseball and a historic three-headed monster in the rotation, the Nationals finally had the complete roster they needed to win a World Series.

Unfortunately, that would not come to fruition for another two years. Dusty Baker sticking with a horrible Jayson Werth in the playoffs and a wild Game 5 left the 2017 Nationals in a familiar and disappointing place. It ultimately cost Dusty Baker his job, as the Nationals chose not to re-sign him as manager. A thing or two goes different in Game 5 and perhaps we’re talking about the 2017 team the way we talk about the 2019 team. But things seemed to have worked out okay for Nats fans.

Most Overrated and Most Underrated Prospects in the Nats Farm System

Keibert Ruiz’s Lack of At Bats is Ridiculous