in National League East, Nationals, The Half Street High Heat Blog
0 0
A A
0
0
SHARES
215
VIEWS
Share on FacebookShare on Twitter

Once the lockout ends, the Nationals have a ton of work to do to round out their roster. Even though they’re in the middle of a rebuild (or retool if you ask Mike Rizzo), they still have holes at the backend of the bullpen, in the starting rotation and in left field. Depending on what they think of Carter Kieboom, you could potentially add third base to that list. But at the end of the day, they could use internal candidates for all of those positions because a Juan Soto extension should be at the top of their list this offseason.

This isn’t to say Soto is even open to signing an extension right now. But the key for the Nationals is to make an offer that at least makes him think about it and makes him want to come to the table and negotiate. Before we get started on numbers, a couple of non-negotiables that Scott Boras and Soto will likely ask for are an opt-out, a no-trade clause and reduced deferrals. That means not asking to defer $100 million like they tried with Bryce Harper. Some deferrals are fine, but deferring ⅓ of the contract is a non-starter.

We’re talking about what would potentially be a historic extension and Soto would likely want to control his future. The no-trade clause would give him an assurance that he would be in DC for the entirety of the contract and the Nats wouldn’t be able to trade Soto anywhere without him signing off on a deal. With Boras, the opt-out clause would likely be a requirement. It would allow Soto to opt-out of the contract likely a few times while he’s still in his prime so he can cash in again. Neither of these items should be a deterrent for the Nationals. The goal is to keep Soto in a Nats uniform for as long as possible.

Now we get to start playing with the numbers. The largest contract in the game deservedly belongs to Mike Trout. Trout signed a 10-year $360 million extension with the Angels in 2019. When you add that extension to Trout’s previous extension signed with the Angels, Trout’s total guarantee became 12-years and $426.5 million, which comes out to $35.5 million annually through his age 38 season. Behind Trout is Mookie Betts, who signed a 12-year $365 million extension with the Dodgers in 2020. The AAV on Betts’s deal checks in well below Trout’s deal at $30.42 and his contract kicked in as he was entering his age 28 season. Betts’s contract will run through his age 39 season. The last contract that I think needs to be taken into consideration is Fernando Tatis, Jr.’s. He checks in fourth as far as largest contracts because Francisco Lindor beat him by $1 million, but the contract is relevant because of how young Tatis was when he signed the deal. Tatis signed a 14-year $340 million contract with the Padres before the start of the 2021 season. The contract started with Tatis’s age 22 season and will run through his age 35 season. If Soto signed an extension this offseason, it would start with his age 23 season.

As far as current position player AAV’s, Trout ranks first at $35.5 million, followed by teammate Anthony Rendon at $35 million and then Francisco Lindor at $34.1 million. I think it’s important to keep in mind that in any potential Soto extension, Scott Boras will probably be looking to break the AAV record for a position player, although I don’t think it approaches Max Scherzer’s new record AAV of $43.3 million. That likely puts us somewhere between $35.5 million and $43.3 million a year.

So if we’re going to use these contracts as a baseline, then the question becomes how exactly does Soto’s productivity stack up against Trout, Betts and Tatis? Pretty well actually. It could be argued that Soto has been the most valuable of the three over the past three seasons. Soto has posted a 14 fWAR and 14.5 bWAR from 2019 through 2021. For comparison, Trout has posted a 13.2 fWAR and 11.5bWAR, Betts has posted a 13.4 fWAR and 15.1 bWAR and Tatis has posted a 12.7 fWAR, 13.6 bWAR over that same three year stretch. Obviously Trout dealt with injuries throughout the 2021 season and Tatis dealt with injuries both in 2019 and in 2021, which contributed to a slightly lower WAR for both. Soto’s ability to stay on the field and consistent production must be accounted for and is something that Boras would certainly bring up in negotiations.

One of the big questions is what would the two sides determine that Soto’s remaining three years of arbitration are worth. If they decide to use arbitration projections, as opposed to evenly spreading money across the length of the deal, it would likely bring the AAV of the contract down a bit. MLBTR projects Soto to earn $16.2 million next season through arbitration. The arbitration record is held by Mookie Betts who agreed to a $27 million salary with the Boston Red Sox in 2020. Soto would be sure to break that in three years if he hasn’t agreed to an extension by then.

There are a couple of ways that the Nationals could structure an offer to Soto. If they try to include arbitration projections for his salary for the first three years of an extension, it could look something like this: $16.2 million next season, a raise to $24 million in 2023 and then a raise to $31 million in his final season of arbitration. That would be $71.2 million over three years, which comes out to an AAV of $23.7 million. In this situation, if you’re looking at making a deal between 12-14 years, then you’re going to be back-loading a deal to bring the AAV back up which is something Boras would require. You’d likely be looking at an AAV of around $41-42 million per season for the remainder of the contract if you try to stick to what he’d earn in arbitration.

Truthfully, with an opt-out being a likely requirement of a potential deal, I don’t see that first structure working. I think evenly spreading the money across 12-14 years would be an option, but I think you’d really entice Soto and Boras if you presented a structure that slightly front-loaded the money. I’m not saying this is ideal, but if the end game is to get Soto to sign, then it’s something worth looking into. The Nats need to be willing to discuss paying Soto around $38 million a year during his prime seasons. As it stands, Soto will hit free agency at age 26, still right in the middle of his prime. With the DH likely coming to the NL, Soto has a chance to be able to put up productive numbers well into his late 30s because of his plate discipline and ability to barrel up a baseball. I mean seriously, if this doesn’t make you drool then I don’t know what will: 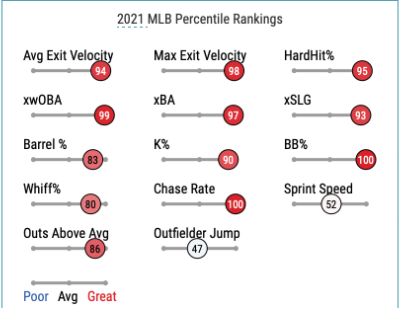 Spotrac developed a “Market Value” feature on their site that gives their opinion on what kind of contract a player could command on the open market. They have Soto ticketed for a 15-year $503,740,455 million deal (very specific, I know). I bring this up mainly because I think it’s a good baseline. While I don’t think 15 years is necessarily out of the question, I think the $33.6 million AAV is probably on the lighter side. If we’re looking at 15 years, I’m thinking you’d probably end up closer to $545-550 million.

I think that structure would make Soto stop and think because he would be making way more up front due to the fact that he wouldn’t be dealing with arbitration figures. His AAV through the first 8 years of the contract would be $36.625, which would be a record for position players. The overall AAV on the deal would be $36.5 million, which again would be a record for position players. He would then have to decide whether to opt-out and forgo $218 million ($36.33 million per year) for his age 31-36 seasons, or stay in DC. That’s a tough decision.

Now for the deferrals — we all know the Lerners would want to defer some money, and I’m not saying you can’t do that here. Mookie Betts has $115 million deferred in his mega-deal, which is close to what the Nationals deferred in Max Scherzer’s contract. I think the most the Nats would be able to convince Soto to defer is between $50-75 million. That could help make the contract more palatable for the Lerners, while still giving Soto an annual salary above $30 million.

We’re talking about a ton of money here. It gives Juan Soto basically everything he would want. It would also give DC one of the most talented superstars in all of sports for the next 8+ years. After losing Bryce Harper, Anthony Rendon and Trea Turner over the past couple of seasons, this deal seems like something the Nationals have to do at this point. At the end of the day, it’s not my money, and what’s a half a billion dollars to a family that’s worth over $5 billion anyways?

Opinion: If the Nationals aren’t serious about a Juan Soto extension, it’s time to make a decision on the superstar’s future

Opinion: If the Nationals aren't serious about a Juan Soto extension, it’s time to make a decision on the superstar's future