in General MLB, The Half Street High Heat Blog
0 0
A A
0
0
SHARES
55
VIEWS
Share on FacebookShare on Twitter

We’re about two months into the lockout and it feels as if almost no progress has been made between MLB and MLBPA. The owners waited from December 1st up until January 13th to make their first proposal since locking players out on December 2nd. Their offer was a lackluster one at that.

With Spring Training quickly approaching, the two sides met twice this week and the hope is that the two sides can soon find some common ground on a couple of issues at hand. While the owners didn’t really bring much to the table with their first offer, MLBPA made it clear with theirs that they’re ready to negotiate.

During Monday’s proposal, MLBPA agreed to drop their request for earlier free agency, meaning any new agreement will likely require players to hit 6 years of service time prior to hitting free agency, which was the case under the last CBA as well. Additionally, MLBPA agreed to drop their request of reduced revenue sharing, instead proposing a revenue sharing cut similar to what was seen in the previous CBA.

All of this seems like progress, but neither of those two issues were likely to be sticking points in a new CBA. Instead, they were likely to be used as bargaining chips all along so that MLBPA could say to the owners “see, we were willing to compromise on this, now what are you going to do for us”. So far, owners have been unwilling to compromise on just about anything.

In their first proposal since the lockout, MLB proposed a formula based salary system for players with between 2 and 3 years of service time, a draft pick reward for teams that place prospects on Opening Day rosters and a draft lottery for non-playoff teams. The only real concession that the owners made here is agreeing that salaries for players with 2+ years of service time needs to be adjusted.

MLBPA was ultimately willing to give up earlier free agency and reduced revenue sharing to drive home their main sticking points: an increased minimum salary for players, earlier arbitration and a higher CBT threshold. These three issues will likely be the three big issues left at the end of this and what may drive this negotiation into mid to late February. MLBPA’s latest proposal includes raising minimum salaries more than $200,000 (from $570,500 to $775,000), arbitration for players after 2 years of service time and increasing the CBT from $210 million to $245 million.

So far, MLB has been reluctant to raise the CBT any higher than $214 million. After yesterday’s meeting, owners offered to increase minimum salaries to $615,000 for first year players. Owners also indicated they are open to a pre-arbitration bonus pool, but remain very far apart on how much money should be in that pool. Owners proposed a $10 million pool, while MLBPA has asked for a pool of $105 million. The pool would be distributed among the top-30 pre-arbitration players based on WAR, Cy Young Award voting and MVP voting. On one hand, its progress that owners have realized that minimum salaries need to be adjusted and that the previous arbitration system is outdated. On the other hand, based on each side’s offer, it’s clear that there’s a wide gap in what each side thinks is fair.

Other issues such as a potential international draft, a salary floor, a draft lottery and a league-wide DH still loom. But luckily with many of these issues, MLB and MLBPA are on the same wavelength. Both sides want a league-wide DH and know it’s going to happen, but with negotiations remaining contentious, neither side is willing to concede anything. The two sides hope to try and hammer out some of the non-core economic issues within the next week or so.

Unfortunately for the fans, this stalemate has been years in the making and could drag on for another couple of weeks. Five years ago, when the current previous CBA was agreed to, ESPN’s Jeff Passan wrote this: 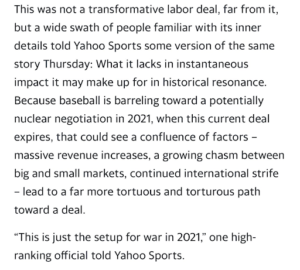 Both sides knew this was going to happen years ago. The relationship between MLB and MLBPA has been contentious for years and we got a little taste of it while the sides were negotiating how to start the pandemic shortened 2020 season. Neither side wants a shortened season since it would mean lost revenue for both sides. So far, only the owners have threatened a delayed start to the season, but the longer this drags on, the closer that comes to becoming a reality.

Meet Kevin Frandsen: Four Things You Might Not Know About the Nationals’ New Color Commentator

Meet Kevin Frandsen: Four Things You Might Not Know About the Nationals’ New Color Commentator

The Strange Case of Erick Fedde

What Could Juan Soto Bring Back in a Trade