in General MLB, The Half Street High Heat Blog
0 0
A A
0
0
SHARES
57
VIEWS
Share on FacebookShare on Twitter

Today we reveal our #6 team in the Top 10 teams of the 2010s to not win the World Series. The teams considered all had outstanding seasons but failed to win the World Series. Many failed to even win a single playoff series. For some teams, such as the Nationals and the Dodgers, we’ve chosen just one of their great teams to ensure that we didn’t include any franchise more than once in this list.

The 2015 Pittsburgh were coming off an 88-win season in 2014 and their second straight playoff appearance. Unfortunately, that playoff appearance resulted in a Wild Card loss to the eventual World Series Champion San Francisco Giants. Madison Bumgarner went the distance in the game, giving up just 4 hits and striking out 10 in the complete game shutout.  Hoping to build off those playoff appearances, the Pirates brought in free-agent catcher Francisco Cervelli and signed veteran pitcher AJ Burnett to joining Gerrit Cole, Charlie Morton, and Francisco Liriano in the lineup. They won the bidding war for South Korean infielder Jung-ho Kang to play 3B. The goal was simple: win the NL Central and avoid the one-game Wild Card matchup.

The 2015 Pirates would win 98 games but still finish 2nd to the 100-win St. Louis Cardinals. They would face division rival Chicago in the dreaded NL Wild Card game, where history would repeat itself. Gerrit Cole would go just 5 innings, giving up 4 runs as Kyle Schwarber broke the hearts of Pirates fans with 3 RBIs in the first 3 innings. 2015 NL Cy Young Winner Jake Arrieta would do his best Madison Bumgarner impression by going complete game shutout with 11 K’s and 0 walks while giving up just 5 hits. The Pirates failed to produce an extra base hit or a single run in either 2014 or 2015’s playoff appearances.

The strength of this team relied heavily on pitching and the team’s identity specifically relied on defensive shifts and getting opposing batters to hit ground balls. The 2013-2015 Pirates teams, which all made the playoffs, had an average 64.3% predicted groundball percentage, which led the league by quite a margin. But the lineup, led by 2013 MVP Andrew McCutchen, wasn’t too bad either.

This was a really productive lineup for the Pirates, despite some pedestrian numbers. Not listed in the stats above are stolen bases, and the outfield in particular liked to run wild on the base paths, combined for 68 stolen between the 3. Jung-ho Kang, who’d go on to finish 3rd in Rookie of the Year voting, allowed the Pirates to move the defensive suspect but powerful bat Pedro Alvarez over to 1B. Josh Harrison was an integral part of the lineup, basically serving as a 9th starter and hitting .287 across 449 plate appearances. Cervelli, Marte, and Walker all provided productive offense while playing well defensively. Future Nat Jordy Mercer was the offensive hole in the lineup, producing just a .613 OPS in 413  plate appearances.

Andrew McCutchen, the lone 2015 All Star in the lineup, was the focal point of this offense, however, and would go on to win his 4th Silver Slugger and finish 5th in MVP voting. It is so far the last time he’s won a Silver Slugger or received MVP votes. At 28-years-old, he hit .292 with 23 home runs and a team leading 96 RBIs. He stole 11 bases and walked 98 times. His 5.0 bWAR was his lowest since 2010, but was still the star of the Pirates lineup. As a Nats fan, I should also point out that the 2015 Pirates were no-hit by Max Scherzer, and would’ve had a perfect game if not for Jose Tabata placing his elbow in the strike zone to get an HBP in the 9th inning.

The Pirates lineup in 2015 were Top 10 in batting average, OBP, stolen bases, and doubles. They were productive but by no means super special. What made this team special was the outstanding pitching that resulted in 98 wins. Their 3.21 team ERA was the second lowest in the majors and the lowest in franchise history since 1984. Let’s take a look at their top 6 starting pitchers and top 5 relievers below. 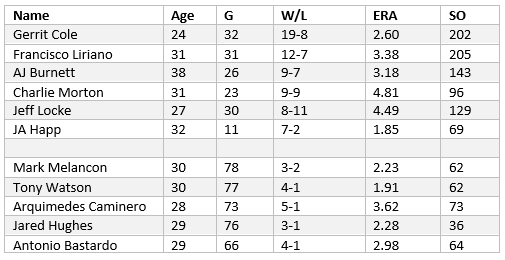 Gerrit Cole had his breakout season in 2015, going 19-8 with a dazzling 2.60 ERA and 202 strikeouts. It was by far his best season in Pittsburgh before he was traded to Houston prior to 2018 season. Francisco Liriano and AJ Burnett were likewise brilliant, while concerns with Jeff Locke and Charlie Morton led the Pirates to acquire JA Happ at the deadline. Happ gave the Pirates a massive boost, going 7-2 with a 1.85 ERA in just 11 starts.  Both Gerrit Cole and AJ Burnett would receive their first All Star selections, and would be joined by closer Mark Melancon.

Melancon led MLB with 51 saves but was by no means the only dominant member of the Pirates bullpen. Set-up man Tony Watson and middle relievers Jared Hughes and Antonio Bastardo were outstanding. Future Nat Joe Blanton and former All-Star Joakim Soria were also impressive in limited appearances for the club.

And though the 2015 Pirates were shut out (again) by the Cubs in the NL Wild Card game, but with their philosophy on pitching and defense, they really changed the game. When so much pitching is geared towards the “swing and miss” these days, the Pirates focused on pitch location meant to induce contact and specifically, ground balls. Much like the Moneyball movement of the early 2000s, however, many other teams began incorporating similar pitching and defensive strategies and ultimately pushed the Pirates back into irrelevancy. Winning 98 games is no joke, but to still finish 2nd in the division and only get one game in the playoffs is a travesty.