in General MLB, The Half Street High Heat Blog
0 0
A A
0
0
SHARES
34
VIEWS
Share on FacebookShare on Twitter

Today we reveal our #5 team in the Top 10 teams of the 2010s to not win the World Series. The teams considered all had outstanding seasons but failed to win the World Series. Many failed to even win a single playoff series. For some teams, such as the Nationals and the Dodgers, we’ve chosen just one of their great teams to ensure that we didn’t include any franchise more than once in this list.

The 2017 Cleveland Indians were coming off an 94-win season in 2016 and a World Series appearance. Unfortunately, that World Series resulted in a Game 7 extra innings loss after having led the series 3 games to 1 over the cursed Chicago Cubs. Hoping to build off that World Series appearance, the Indians brought in free-agent first baseman/designated hitter Edwin Encarnacion to bolster their lineup. They had been so close to their first championship since 1948, and they wanted to make sure they had the lineup to match their outstanding pitching.

The 2017 Indians would win 102 games which would be the best record in the American League and Cleveland’s most wins since 1954. They went an incredible 36-4 to end the season, including an American League record 22-game winning streak (which eclipsed the 20 game win streak set by the Moneyball A’s) before being upset in 5 games by the Wild Card New York Yankees in the ALDS. As of this writing, their franchise still has the longest championship drought in MLB currently standing at 74 years (1948-present 2022).

The strength of this team relied heavily on pitching with a stellar rotation and even better bullpen. But the lineup, led by new signing Edwin Encarnacion, wasn’t too bad either:

This was an incredible lineup for the Indians. They were 4th in walks and 5th in batting average, and 2nd in OBP and OPS while having the second lowest strikeout total. In fact, if it weren’t for the Astros (and their 2017 cheating scandal), the Indians would’ve led the majors in all three of those latter categories. They got on base, hit for power, and didn’t strike out. Jose Ramirez had his first All Star appearance, hitting .318 with 29 home runs and a league leading 56 doubles. He did all that while only striking out 69 (nice) times. Francisco Lindor, earning his second straight All Star appearance, had his first of what would be three straight 30-home run seasons for the Indians while leading the majors with 129 runs scored. The two infielders combined for 32 stolen bases as well.

Michael Brantley, who was in the midst of a difficult two years battling injuries, was the other position player to make the All Star team. At that time, Brantley was underrated, especially after having only played 11 games on that 2016 club. While he’d only play 90 games for the Indians in 2017, he’d hit .299 with 52 RBIs and stealing 11 bases. He’d miss most of August and September before returning to the lineup for the playoffs. The two big boppers in the lineup were Carlos Santana and the aforementioned Edwin Encarnacion. Santana would hit only 23 home runs, but he’d walk 88 times versus just 94 strikeouts, while Encarnacion would hit 38 homers with 104 walks versus 133 strikeouts.

As if that wasn’t enough, they had added depth in Austin Jackson and Lonnie Chisenhall to boost their lineup. Austin Jackson, albeit in just 85 games, had arguably the best season of his career, hitting .318 with 19 doubles, 3 triples, and 7 home runs while playing good outfield. Chisenhall, in just 82 games, would hit .288 with 17 doubles, a triple, and 12 home runs. Both of these players would step in for Michael Brantley and others when needed. Jay Bruce was acquired from the Mets at the deadline, featuring in 43 games for the Indians and slugging 9 doubles, 2 triples, and 7 home runs in just 149 AB’s.

Partly because of the historically good Astros and Dodgers and partly because of the stellar pitching, the 2017 Indians lineup gets overlooked a bit, but as we discussed above, it shouldn’t. Brantley, Lindor, Ramirez, Santana, and Encarnacion were a fantastic core of lethal hitters that also walked a ton. And yet the strength of the team was their pitching staff. Let’s take a look at their top 6 starting pitchers and top 6 relievers below: 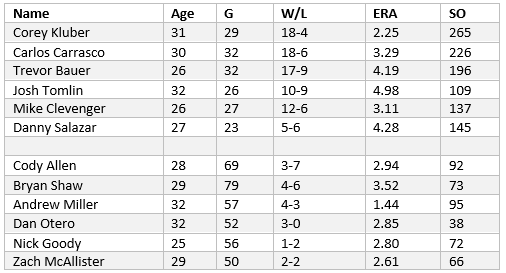 Somehow this pitching staff only had 2 All Stars- Corey Kluber and Andrew Miller. This pitching staff was historically good. They led the majors in ERA, strikeouts, lowest walks allowed, lowest home runs aloowed, complete games, and shutouts. Their 3.30 team ERA was the lowest in their franchise history since 1972, while their 1,614 strikeouts were the most in their 116-year history up to that point.

Corey Kluber won his second Cy Young while Carlos Carrasco finished 4th in the voting. Mike Clevinger had his breakout season, going 12-6 with a 3.11 ERA and 137 strikeouts in just 21 starts (27 games total). Trevor Bauer, whose stats above don’t look great, had an outstanding second half of the season, going 10-2 with a 3.01 ERA, giving the Indians a lethal top 4 of their rotation in the second half of the season. That obviously played a big part in their 36-4 finish to the season.

The 2017 Indians had six relievers appear in 50+ games for them that season and every single one of them had an ERA under 3.60 with all but one with an ERA under 3.00. Cody Allen was the closer, but Andrew Miller was the All Star and fireman for this bullpen, leading the relief core with a 1.44 ERA and 95 strikeouts in just 57 games. Bryan Shaw, the lone member of the six to have an ERA over 3.00 appeared in a whopping 79 games, which might explain his slightly higher ERA. The Indians had six studs to rely on in the bullpen late in games on top of their fantastic starting rotation. Going into the playoffs, it was safe to say that they were the favorites to go to the World Series, despite the Astros 101 wins and record setting offensive numbers (cheaters).

And yet after going 36-4 in a 40-game stretch to end the season, they ran into the 91-71 Yankees. Behind a stellar Game 1 pitching performance from Trevor Bauer and walk-off single by Yan Gomes after 13 innings in Game 2, the Indians had a 2-0 stranglehold on the series heading to the Bronx, with Carrasco yet to pitch. Unfortunately, Masahiro Tanaka pitched outstanding for the Yankees in Game 3 and Andrew Miller gave up the go-ahead home run to Greg Bird in the 7th inning to give the Yankees a 1-0 win. Trevor Bauer would get roughed up in Game 4 and then Kluber couldn’t hold the Yankees back in Game 5. It was deja vu for the Indians as just like the season before in the World Series, they’d blow a 2 game lead and lose 3 straight to be eliminated from the playoffs. Perhaps if Aaron Judge doesn’t rob Francisco Lindor of a 2-run home in Game 3, the Indians win the series and then take down the Astros in the ALCS, who knows. But the 2017 Indians were definitely one of the best teams of the decade to not win the World Series, and the drought continues for Cleveland to this day.