Two months from today will mark 100 years since a controversial Supreme Court decision, Federal Baseball Club of Baltimore v. National League of Professional Baseball Clubs, granted Major League Baseball an exemption from the Sherman Antitrust Act, using the argument that baseball clubs do not engage in “interstate commerce”.  Through this ruling, the Court granted baseball permission to flout the nation’s core antitrust law, a dispensation that no other business (before or since) has ever been given and which endures to the present day.  But the end may finally be at hand.

Bernie Sanders and other lawmakers are seeking to finally terminate MLB’s antitrust exemption through new legislation called the Save American Baseball Act.  Before examining the proposed new law itself, it is necessary to understand a bit how and why baseball was granted their strange exception in the first place, what it means to the league today, and the likely consequences of its revocation.

This lawsuit which led to this ruling was filed by the Federal League, an upstart league in competition with the American and National Leagues in the early part of the 20th century.  It was successful enough that it had begun to attract some of the stars of the Major Leagues, including nearly luring Walter Johnson away from the Washington Senators.  The owners in the Major Leagues decided to destroy this rival league and they were able to buy out every team but one, the Baltimore Terrapins.  The Terrapins owner refused to sell and instead filed a lawsuit alleging that the Major Leagues had created a monopoly through collusion and anti-competitive practices and were thus in violation of the Sherman Antitrust Act.  (The history of the case and the circumstances that led to it are fascinating and complex; I recommend Stuart Banner’s The Baseball Trust: A History of Baseball’s Antitrust Exemption for anyone interested in the minutia of the situation.)

The Sherman Antitrust Act of 1890 was a law created to prevent businesses in the same industry from merging with each other or colluding to create monopolies.  It was designed to restrict business’ ability to control prices and to prevent them from limiting consumer choices.  The behavior of the Major Leagues in this case was a textbook example of exactly what the law was created to deter, but the Supreme Court bizarrely ruled that a business made up of teams traveling across state lines to play against each other was not engaged in “interstate commerce” and hence was not subject to the Act.  This argument was specious at the time and is even more laughable now, with national broadcast deals, profit sharing agreements, and dozens of other large and small ways the teams and leagues are interconnected.  And despite repeated challenges to the ruling in the decades since, the MLB antitrust exemption remains in place today.

What does this exemption do for MLB today?  And what would losing it mean?

So what does this historic exemption from labor laws mean for Major League Baseball right now?  MLB enjoys the ability to restrict both access to its business and options for its employees in a way that no other sports league (or any other business in America) can boast.  While unions and collective bargaining agreements for major league players and umpires have limited their control in those areas somewhat, the League still has carte blanche to prevent competition, to collude with each other regarding salaries and rules, and to exploit their non-unionized employees however they choose.

Gallons of ink have already been spilled discussing the deplorable treatment of minor league baseball players; treatment which is only possible because MLB is not subject to the same labor laws that protect every other employee in the country.  The removal of their antitrust exemption would mean that minor leaguers would have to be paid a fair wage, and it would also likely lead to higher contracts at the Major League level, an eventuality the owners desperately want to avoid.

It seems clear, however, that the end is nearly upon us.  Vermont Senator Bernie Sanders has MLB directly in his sights and has introduced legislation to bring an end to the special treatment they enjoy.  On March 10th, just after the owners and the players union agreed to the new collective bargaining agreement, Senator Sander released the following statement: 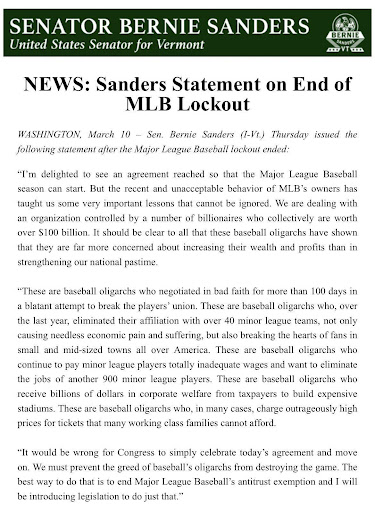 True to his word, on 3/14/22 Senator Sanders introduced the Save American Baseball Act, the text of which can be read here.  The most important portions are excerpted below: 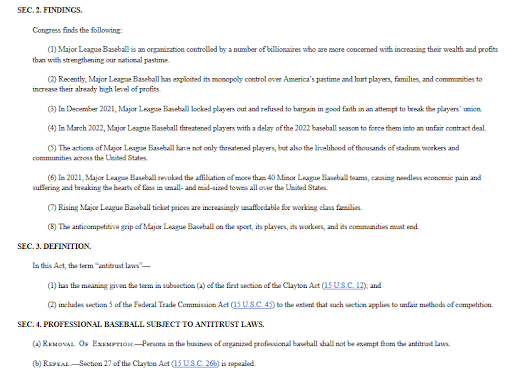 This legislation is likely to become law.  Both sides of the political aisle have bones to pick with MLB, and it is difficult to imagine a scenario where either party goes to bat (see what I did there?) for this unpopular exemption from the law with no coherent legal basis.  The biggest question now is how this huge change will impact Major League Baseball.

First and most obviously, MiLB contracts will have to change.  Lawsuits will be brought immediately and the owners will have to bring their business practices into line with labor laws or risk legal and financial consequences.  With their ability to collude with one another lost, Major League contracts will also rise, with the richest teams spending the most and the more miserly teams becoming even less competitive than they are now.   The most probable outcome of this is that within a few years, perhaps as soon as the next collective bargaining agreement, MLB will need to institute both a salary cap and a salary floor.  This may drive some owners out, which could lead to ownership changes, team relocations, and other major disruptions to baseball as we know it.

The antitrust exemption has been a part of the baseball landscape for a century and no one knows exactly how things will play out once it’s gone.  Whatever the outcome, it is long past time for MLB owners to follow the same rules as everyone else.