in National League East, Nationals, The Half Street High Heat Blog
0 0
A A
4

The 180 that Patrick Corbin has gone through as a pitcher can only be described in one word: ugly. He’s gone from three shutout innings in Game 7 of the World Series to now statistically one of the worst pitchers in the league over the last two seasons.

Unfortunately for the Nationals, Corbin is their ace and he has not pitched like one this season. Through his first two starts of the season Corbin has pitched only 6.2 innings, struck out 7, walked 5, allowed 14 hits and has given up 8 earned runs. That’s a 10.80 ERA and a 2.85 WHIP.

On Opening Day against the Mets, Corbin struggled and when you look at the advanced metrics you can see the red flag. His velocity was down from his career average: Fastball -1.4 MPH, slider -0.8 MPH, sinker -1.1 MPH. His spin rate was down as well: Fastball -50 RPM, slider -38 RPM and sink -42 RPM. His slider’s vertical and horizontal movement was down as well. Now, it was rainy and cold so I didn’t look too much into this.

In last night’s start Corbin’s pitch velocity was up from his average velocity (slider was 0.5 mph above average, highest amongst his pitches). His spin rate was up amongst all pitches (changeup had 85 RPM more than average highest amongst all). Why did he get rocked if velocity and spin rate were consistent? The issue was his pitch movement. His vertical and horizontal movement on the slider was 2 inches below his normal break.

Corbin is a healthy pitcher, and at only 32 years old, guys at this age don’t suddenly lose their talent without a massive injury. There were concerns that his 2018 season in Arizona was an outlier, but even so, the season he had in 2021 and so far this season are far worse than anything he’s done. So why all of a sudden is he not an effective pitcher? The answer to me is his release point.

I watched three random games that Corbin started. From left to right below, the first picture is from 2019, the second from 2021 and the third is from last night. Notice how in 2019 Corbin had a ¾ release point versus 2021 and last night when he displayed a very high release point. 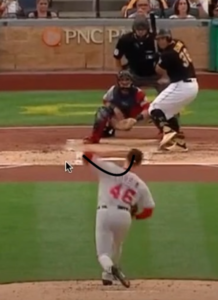 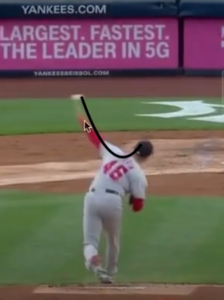 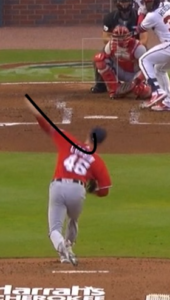 Publicly, the Nationals are saying that Corbin’s workload in 2019 is why he is struggling. We all need to hope that internally they are working on fixing his release point or it is going to be a long, long season.

The Good, the Bad, and the Ugly for Nats vs. Mets Opening Series

Who’s Hot, Who’s Not: A Week in Review

Who’s Hot, Who’s Not: A Week in Review