As of recently, Juan Soto has been slumping. In the final two games of the Giants series where the Nationals were swept, he went 0-8 and did not walk a single time in that span. He also went hitless in 3 straight games between the final game of the Pirates series and the first two games of the Diamondbacks series. While the Giants have an astounding staff and pitched Soto very well in this series, the Pirates and Diamondbacks are at the other end of the totem pole with pretty lackluster staffs. So, what’s going on?

Similar to what we saw in the first half of 2021 last year, Nats fans were worrying about Soto’s uncharacteristically just above average hitting (which, for the best hitter on the planet, is a significant drop-off). However, Soto already proved this to be a fluke in last year’s ballistic second half that catapulted him to finishing as the runner up in NL MVP voting despite being on a team that won 65 games. I have seen some early similar worry so far this season, which is funny considering that Soto is both 1. off to a better start than he was as this time last year 2. already proved how quickly he can go from a complete slump to going on a total tear. 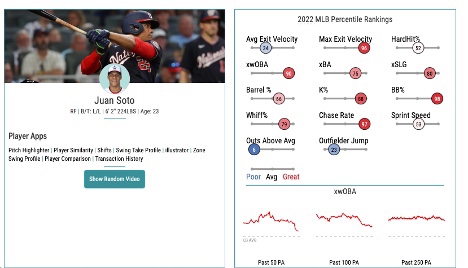 I mean, these are all Juan Soto numbers for the most part. The only characteristically low numbers are the batting average, SLG, and OPS (which is a result of SLG). The other thing is he has not been hitting the ball nearly as hard so far this year, but we’ll dive into why that is in a bit. His fielding has been pretty yikes so far considering the fact that he took a massive step forward into becoming one of the best defensive right fielders in baseball last year, but again it’s a small sample with limited attempts. Additionally, no one truly cares about the best hitter in the world’s defense. But going back to the offense– with a limited sample of only 18 games so far, this screams “slump” and not something we should be worried about long-term with Soto.

Everyone remembers the big thing with Juan Soto in the first half last year was his inability to elevate the ball, resulting in a lot of ground balls. And when he was getting hits, they were singles and the occasional double down the line. It took him until the end of June to get his first home run of the season at Nationals Park. We also all remember the absolutely stupid second half he had where he fixed his swing in the Home Run Derby and came out in the first game of the half with 10 total bases. Once he got his swing right, his season numbers finished at .313/.465/.534 with a .999 OPS (bust, couldn’t finish with 1.000+), 163 wRC+, 154 OPS+, 29 HR, 20 2B, and 145 BB to 93 K.

In every full season of his career, Soto has been better in the second half that the first half. Again, there are some very distinct things you can see with Juan when he is not right vs. when he is right. When he isn’t right, he’ll foul off pitches right down the pipe that he will usually bang into the seats. However, even more so, he will pull a lot of ground balls to the second or first baseman, and we saw a lot of those outs when he took two 0-fers in a row in the last two games against the Giants. This is where the low average exit velo so far is coming into play, as a lot of these ground balls are getting slammed into the ground and are not coming off the bat at a high rate of speed. On another note, this again points back to the argument that ALL baseball players slump, even the best hitters in the game.

There could be a couple reasons why this is happening to Soto specifically at this time. The first is the shortened spring training, where pitchers and hitters both needed to quickly ramp up. Even though they are professionals, hitters still need a great deal of time to get their timing right on MLB-caliber pitching. We’ve already seen instances of solid contact with Soto, as his first homer of the season on Opening Day was launched into the second deck. He destroyed another one in Atlanta and then hit a hypersonic laser out of the ballpark in Pittsburgh that shot through the tunnel and into the Allegheny. Earlier in the first week or so in the season, it appeared that Soto was *just* missing the barrel and hitting a lot of deep flyouts.

At the moment, however, it’s the ground balls that are getting him. Again, this goes back to the timing thing, as it seems like he’s pulling off a lot and his contact point is too far out in front of every pitch. However, it also appears that Soto has been pressing a little bit, and this is from trying to overcompensate for the Nationals lineup being absolutely abysmal so far this season. Yes, Soto is arguably the best hitter in the world, but that doesn’t mean he isn’t still 23 years old and is trying way too hard to put the team on his back, and understandably so since no one in the lineup, outside of Josh Bell and a few flashes from Keibert Ruiz, has hit this season.

From my handy eye test, this overcompensation has resulted in a lot of uncharacteristic swings from Soto on pitches far out of the zone that he typically spits on without batting an eye. It’s like he’s trying way too hard to make something happen on offense instead of being himself. And it’s funny because most of the numbers show that he still is himself. Even if the Nats win 50 games this season, we all know the tear from Soto is coming even if he begins getting walked at an absurdly high rate again. Patience is key.

What’s Going On With Nelson Cruz?