We’ve all been waiting on a Victor Robles breakout (or even a resurgence back to 2019 form) for a couple of seasons now. After starting the season 0 for 18, Davey Martinez gave him a couple of games off to work on his swing with Darnell Coles. Since then, he’s 15 for his last 40 including 5 doubles (.375 BA over that span). So is it a breakout, just a small sample size or small adjustments both in approach and expectations?

Robles has certainly looked more comfortable at the plate over the past 13 games and there are signs that his recent production is sustainable. Coles has been working with Robles recently to raise his hands back up to where they were a couple of years ago. He’s made some other tweaks to his stance that have produced some encouraging early results.

The fact that Robles’s hands dropped and apparently nobody noticed it before Coles arrived is incredibly alarming considering over the past couple of years the Nationals have watched both Robles and Carter Kieboom slump in the Majors. Were their failures a result of confidence issues, talent issues, or coaching issues? I’m beginning to wonder if it was a combination of confidence and coaching. It’s entirely possible that sometimes a player’s talent just doesn’t translate to the major league level. But when you have two top prospects both flop in the Majors, it’s time to look at your coaching and development.

The thing that many of us need to keep in mind when assessing whether or not Robles is worthy of a starting job is that he will never be the 5-tool prospect he was touted to be. His baseball savant page over the past 3 seasons has been disgusting, and not in a good way. So far this season though, his xwOBA, xBA and xSLG are back around where they were in 2019. At this point, I think the best case scenario for Robles is that he’s able to come close to replicating his 2019 season. Following the 2019 season, Robles put on 15 pounds of muscle, which ended up making him less agile defensively and less of a threat on the basepaths. On top of that, he thought he could build on the 17 home runs he hit during the 2019 season. I’m sure “Mr. Launch Angle” Kevin Long was elated to hear that. The problem is, that’s not Robles’s game. His power never translated to the Majors and its more than likely that the 17 home runs that he hit in 2019 will end up being an outlier and not the norm.

Here’s a look at Robles’s ABs since April 17th, which is the day that he collected his first hit of the season: 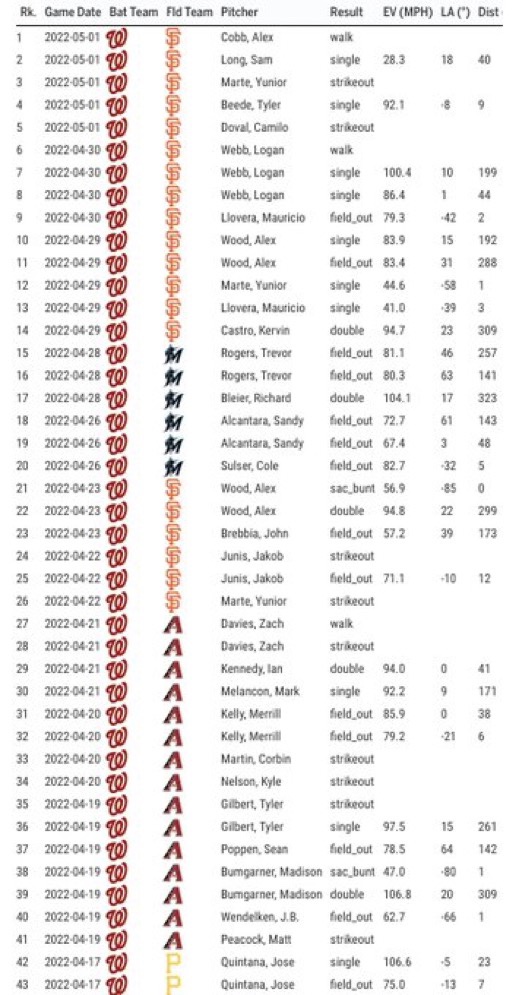 You can see that even many of his hits have an exit velocity around or below 90 mph. While some of that is luck, another part is simply that Robles has finally recognized that if he puts the ball in play he can beat an occasional ground ball out. He has two bunt hits over his past two games. By no means is this an exciting approach, but it’s one that could give the Nats a traditional leadoff hitter at the top of their lineup if he sticks with it.

Since Robles broke into the Majors as a full-time player in 2019, he’s been in the 1st percentile in exit velocity every single season. So far this season, he’s in the 4th percentile in exit velocity. It’s a slight improvement, but there’s another stark difference in his game. In 2019, his average launch angle was 16.7, and that increased to 19 in 2020 and 19.9 in 2021. This season it’s at 4.6; MLB average is 12. Clearly 4.6 is horrendous, but it also doesn’t take a rocket scientist to understand that one of the worst exit velocities in the league combined with a high launch angle isn’t a good combination. In 2020-2021, Robles didn’t even have warning track power. He would just routinely fly out to left field and Bob and FP would comment that he “got good wood on it”, which was rarely true.

Robles isn’t a player who should be concerned with launch angle or even exit velocity. This season we’ve already seen a stark difference in his approach at the plate. He’s hitting line drives at a higher clip than any other season in the Majors, and he’s hitting the ball on the ground at a far higher clip. For most players, I’d much rather see them hitting the ball in the air, but for Robles, I actually don’t think his increased GB% is a bad thing. If he can get his swing right and make consistent contact, he’s going to be just fine.

A good comparison for what we should come to expect from Robles going forward is actually one of his current teammates, César Hernández. It’s entirely possible that Robles could have another season where he hits 14-17 home runs again. But the expectation should be that he hits somewhere around 10 home runs a year, learns to take his walks (like we’ve seen over the past couple of games) and hits around .265-.270 with an OBP somewhere around .350. Robles doesn’t hit the ball very hard and he never has since he broke into the Majors. It’s just not part of his game. So reinventing his game appears to be what Coles is working with Robles to do. If it works, it might just save his career.

The Nats Are One Weird Baseball Team

The Nats Are One Weird Baseball Team