On a team that is 20 games out of first place in June, it can be hard to find bright spots. Unfortunately, the 2022 Washington Nationals fall into this category. The Nationals haven’t had many things go their way this season, but they, like every other team in baseball, will have at least one player representing their organization in the Mid-Summer Classic.

According to early polling results, superstar outfielder Juan Soto seems likely to be Washington’s representative on the 2022 National League All-Star Team. While Soto has had a down year for his standards, his fame and overall popularity around baseball may earn him a spot on the team. This is something that isn’t uncommon with superstars around the league.

Whether Soto makes the team or not, there’s one player on the Nationals’ roster who absolutely deserves to be an All-Star. That guy is free-agent-to-be first baseman, Josh Bell.

When you compare Bell and Soto’s seasons to date, Bell is better in nearly every offensive category. The first basemen has a better batting average, on-base percentage, slugging percentage, OPS, and OPS+. Bell also has more hits, more RBIs, and a better overall WAR.

Now this isn’t saying Soto does not deserve to make the team, it’s simply showing how much Bell, who has been undeniably better this season, absolutely has to make the roster.

When you compare Bell to the other first basemen around baseball, he stacks up against the best in the game. Below are where Bell ranks among all first basemen in Major League Baseball in some important offensive categories.

Despite being in the top five or six in baseball in nearly every single major offensive category, Bell did not even crack the top 10 at his own position in the most recent All-Star voting update released Monday. With Paul Goldschmidt and Pete Alonso both having MVP-Caliber seasons, Bell’s main competition for a spot on the roster may be Nationals’ nemesis, Freddie Freeman.

If Josh wants to make the All-Star team for the second time in his career, he may have to beat out the veteran Freeman to get there. When you compare the two, it’s hard not to agree that Bell is more deserving of the two.

Below are how Bell and Freeman compare statistically this season. 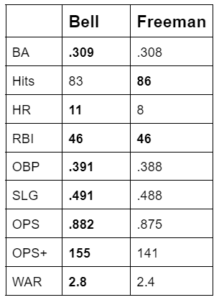 As you can see, Bell owns the advantage in nearly every category. If one of them is going to make the All-Star team, it should be Nationals’ first basemen.

No matter how it happens, Josh Bell absolutely needs to be an All-Star. The 29-year-old has been one of the best offensive players in baseball this season and has been the only consistent presence on one of the worst teams in baseball.

Heading into free agency, Bell deserves to be rewarded for his outstanding season with a selection to the Mid-Summer Classic.

If you want to see Josh Bell in this year’s All-Star Game, Vote HERE to send the first basemen to Los Angeles!

Most Overrated and Most Underrated Prospects in the Nats Farm System