How The Nationals Can Fix Their Player Development

We are in a new era of the Washington Nationals, thanks to the team trading Juan Soto to the Padres for Mackenzie Gore, Robert Hassell III, CJ Abrams, James Wood, Jarlin Susana and Luke Voit. This new era is entirely hanging onto the Nats’ ability to develop not only these prospects but the plethora of young guys on this roster.

Luckily for the fans, this team stinks at developing players! But the good news is that there are ways to improve their ability to develop.  So, how can they improve? Let’s look at 3 easy ways that they can and one hard (but crucial way) that the Nationals can.

This one is very simple and sounds silly but it works. The Nationals rank dead last in MLB with -47 defensive runs saved, the next closest is -30. They are also 26th in baseball in Zone Rating at -11.6 (basically means the Nats are 11 runs worse because of not being able to get to balls that were playable).

Emphasizing defensive positioning not only helps players become better fielders, but it also helps your pitchers. Take everyone’s favorite pitcher Patrick Corbin into consideration. According to OAA (outs above average) he’s had more than double the amount of runs and outs given away as the pitcher with the next worse defense behind him. 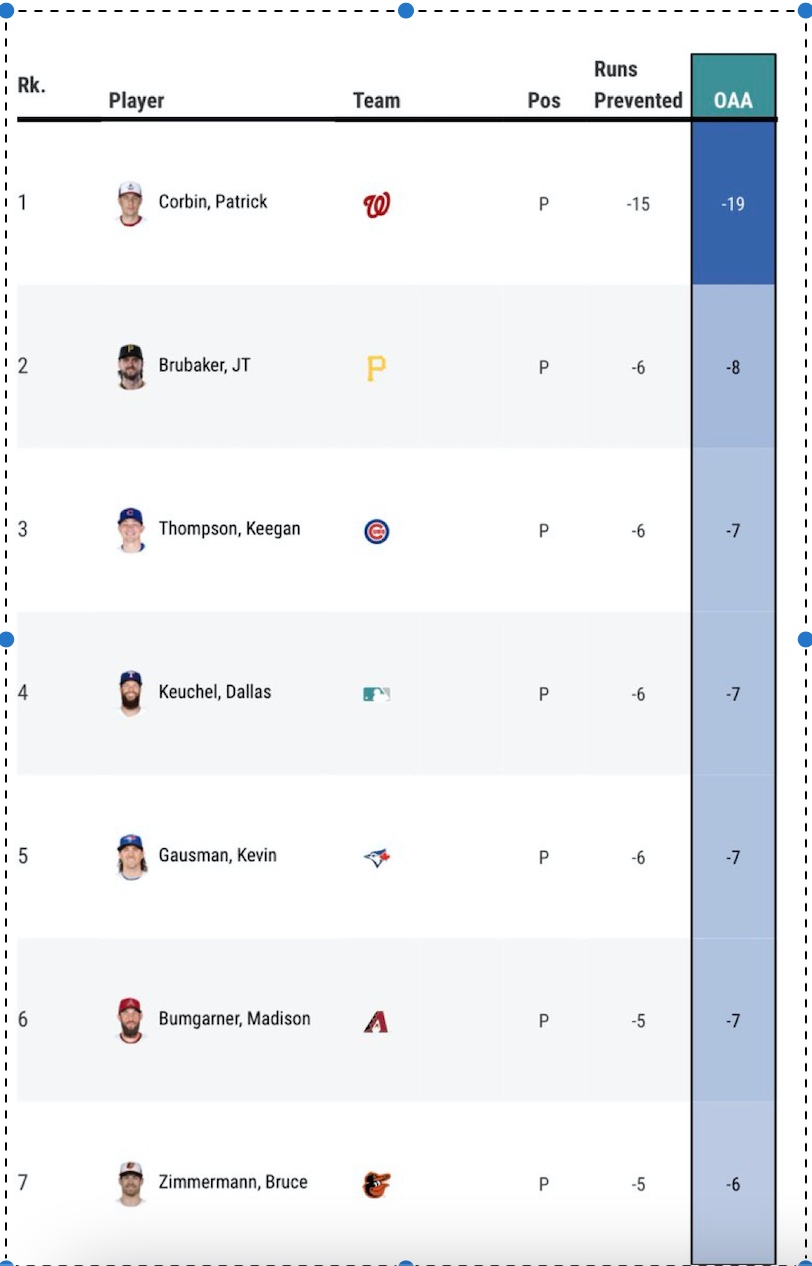 Patrick Corbin’s numbers still wouldn’t be great but if that number is cut even in half you’re talking almost a full earned run lower and maybe a couple more wins for the Nationals.

How can the Nats do this? By embracing what the Mets did. The Mets put a huge focus on defensive positioning a couple years ago. Their analytics department includes scouting reports on where players are most likely to hit the ball and they shift, a lot. The good news is – this doesn’t involve a good research and analytics team. This is all very simple and common data. Right now the Nats shift 36% of the time which is league average and that needs to come up. If they do this – we could see a great improvement in defensive numbers.

This is another simple thing that the Nationals can embrace that will help every single pitcher from low A to MLB. Most baseball fans can spend 10 minutes on a guy’s savant page and watch a couple of video clips and figure out what a guy’s best pitch is.

This is very simple, throw your good pitches more and your bad pitches less and you will succeed.

The Nationals are also very predictable and old school with their pitching mixes. Fastballs early in counts, off-speed with two strikes. Hitters expect that, so mix it up, don’t become predictable and you will succeed more. The Phillies embraced this model a couple of years ago and now they have 3 elite pitching prospects.

3. Understand You’re not the Smart Teams

The Nationals scout and work with minor leaguers like it is 1985. Yes, the Nationals are making changes and improvements so I will bump that up to 2005. They did just install Trackman and Trackman data (high school teams have been using this for years) as well as other improvements to get analytics and Statcast data in games.

This team needs to keep making their improvements at their own pace. Do not worry about where the smart teams are because those teams aren’t going to be where they are today when they catch up. The teams like the Dodgers, Rays, Padres are constantly evolving and advancing their analytics – do not try to catch up with them.

1. Create a Plan from Moment Entering Org and Stick to it

There are many things that can go here but this one is far and away the most important one. We have seen far too many times the Nationals constantly shifting their plans with young guys. From Joe Ross going from starter to reliever to long man out of bullpen back to starter and then back to reliever and so on. Carter Kieboom playing every single position on the diamond and trying to constantly change the type of hitter he is. The Nats do this a lot and it completely screws up a player’s development.

The smart teams draft guys based on one or two tools that your player development staff is excited about because they know they can mold that player based off of those tools and create great players. The Dodgers are MASTERS at this. They create plans and stick to it for everyone. That is why they have by far and away the most Rookie of the Year winners.

If the Nats trade for a guy and say they love his arm strength in the outfield and think he has great power potential (James Wood or Robert Hassell), then put them in right field and focus on enhancing their power so you can create a power hitting right fielder who is a routine 30+ home run guy.

Sticking to a plan is difficult– it takes (in some cases) patience and a lot of attention to detail. But it is something crucial that can drastically change the future of your franchise.

Developing players is hard, but there are easy things this team can do and just embracing that can go a long way into taking them from the worst team at development into a average one at development. The newest player development hires are the most important hires in franchise history because they solely impact the next decade for this franchise. No pressure.

Although Shorter than We Wanted, Juan Soto Forever Leaves A Lasting Legacy in DC