How Camden Yards is Helping the Orioles Remain in Contention

The Baltimore Orioles are a surprising 58-52 and just a half game out of the AL Wild Card spots. They are on the verge of sweeping their division rivals in the Toronto Blue Jays just over a week after trading veteran slugger Trey Mancini and All Star closer Jorge Lopez. Since the debut of top prospect Adley Rutschman on May 21st, the Orioles are 42-28 after starting 16-24. We’ll talk more about Adley in the coming weeks, but first let’s talk about something else that’s greatly benefitted the Orioles this year: the changes to the outfield wall from previous years.

In January, the Orioles confirmed reports that they were moving the left field fence back and raising the walls. The distance down the left field line to the foul pole would remain the same at 333 feet, but then the wall in left field would almost immediately move back, going from 364 feet to 384 feet, and in the left center field corner, 410 feet. The walls would go from roughly 7.5 feet to 13 feet. You can see the changes in the dimensions below. 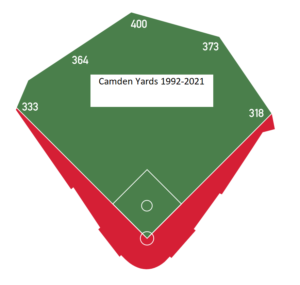 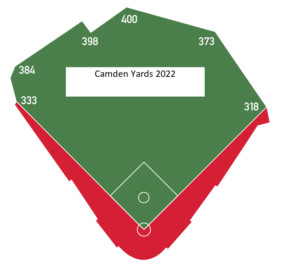 Like most of the ballparks in the AL East, Orioles Park at Camden Yards was a hitter’s park. In recent years we’d watch the likes of Gleyber Torres and Vladimir Guerrero Jr feast on the power alley that was the left field fence. Now, while Orioles pitchers have generally been better than they were in 2021, they’ve certainly benefitted from this adjustment. In 2021, Orioles pitchers had a 5.99 ERA and had given up 155 home runs. The ballpark in totality gave up 277 home runs in 81 games, the most in the majors.

The previous dimensions ranked the left field fence as the 28th-deepest in baseball. The fence height was the 17th highest and the amount of fair territory was 23rd in MLB. With the new dimensions the Orioles now have the deepest left field fences in baseball, the 8th highest fence height, and the 5th most amount of fair territory. All of this, according to Park Factors, have swung Orioles Park at Camden Yards from a very hitters’ friendly park to a pitchers’ park in just a few months.

According to Baseball Savant, Park Factor is defined as “the observed effect of each displayed stat based on the events in the selected park. Each number is set so that “100” is average for that metric, and the park-specific number is generated by looking at each batter and pitcher, controlled by handedness, and comparing the frequency of that metric in the selected park compared to the performance of those players in other parks.”

Baseball Savant goes on to provide an example, though I’ve adjust the ballpark to reflect our current subject, hence the brackets:

In 2021, the Orioles had a Park Factor of 110, tied for first in the league with the Reds’ Great American Ballpark. That means it was tied for the most hitter friendly park. In terms of home runs, they led the league by a lot with a 153 home run park effect. Using the baseball savant example above means that for batters and pitchers who played both at Camden Yards and elsewhere, 53% more home runs were observed at Camden Yards.

After last night’s game (Bo Bichette hit 2 homers and Rougned Odor hit one), Camden Yards is 25th in the league in Park Factor, with 96. In terms of home run park effect, they are 28th, with 71. That’s a massive swing from 2021 because it means that instead of 53% more home runs being observed, there’s now 29% less than the average. That might be the biggest swing in baseball history.

And with a current rotation that includes the likes of Austin Voth, Kyle Bradish, Dean Kremer, Jordan Lyles, and Spenser Watkins, the Orioles are 9th in MLB with a 3.41 ERA in 54 games at Camden Yards. They are tied for 5th in the Majors with only 49 home runs given up. The two players mentioned earlier, Vlad Guerrero Jr. and Gleyber Torres, have combined for 0 home runs in 11 games at Camden Yards this season. Is that because of the new dimensions? Maybe more for Torres than Guerrero, who has too small a sample size to make any conclusion.

Even after the trades of Mancini and Lopez, the Orioles are still winning, and while the bullpen has been heavily used, the starters are improving massively and eating more innings. With the assistance of the new dimensions, the Orioles have a real chance at staying in contention down the stretch as they seek their first postseason berth since 2017.

Believe It or Not, But There’s Still Reason to Watch These Nats