The Nationals and the Shift

The defensive shift in baseball may have its days numbered, but there’s been no news on when or how the defensive shift rule changes will be coming. While those changes may help offense, I’m against banning the shift. Players should learn to hit it the other way if they want to beat it. In 2022, MLB teams are shifting on 34.9% of plate appearances including an astounding 56.1% of the time against left-handed batters.

Yesterday, in the first inning, with 2 outs against the Cubs, Josiah Gray was facing righty hitter Franmil Reyes with nobody on base. The Nationals had a shift on for the right handed batter (see image below), which means second baseman Cesar Hernandez was lined up basically behind the second base bag. With 2 strikes, they remained in that shift despite catcher Tres Barrera setting up down and away in an effort to get Reyes to chase a a breaking ball outside. Perhaps they were playing for Reyes to roll the ball over into the shift but instead the  result was weak contact to the right side of the infield, which because of the shift, was still vacant. Hernandez was able to move over and field the ball, but not in time to make what should’ve been an easy routine out.

Charlie and Dave on the radio broadcast questioned the decision to remain in the shift with 2 strikes, particularly when pitching to the outside against a pull hitter, as the most common contact result is a weak ground ball. But, as our podcast co-host Nick suggested when I brought it up to him, the Nats likely stayed in the shift and expected him to roll over on the pitch outside and that this was just a case of bad luck.

Most of the league was already shifting their infields against pull-hitters, but it really exploded in usage in 2014 when the Houston Astros shifted 1,562 times, saving an estimated 44 hits. The 2014 Nats by comparison, only shifted 258 times, 29th in the league. In 2022 so far, the Blue Jays lead the league with 2,245 total shifts (55.1% of the time), while this current Nats team has shifted 1,530 times– good for 13th in MLB.

Most commonly, the shift is used when facing left-handed batters like Bryce Harper, Juan Soto, or Kyle Schwarber. You’ll almost always see the defense in a shift on them, especially if there’s no men on base. You don’t see it nearly as often when facing right handers. But when the righty is a pull hitter like Reyes, you’ll see the infield shift to try and prevent a hit through the left side. Below is Franmil Reyes’s spray chart. 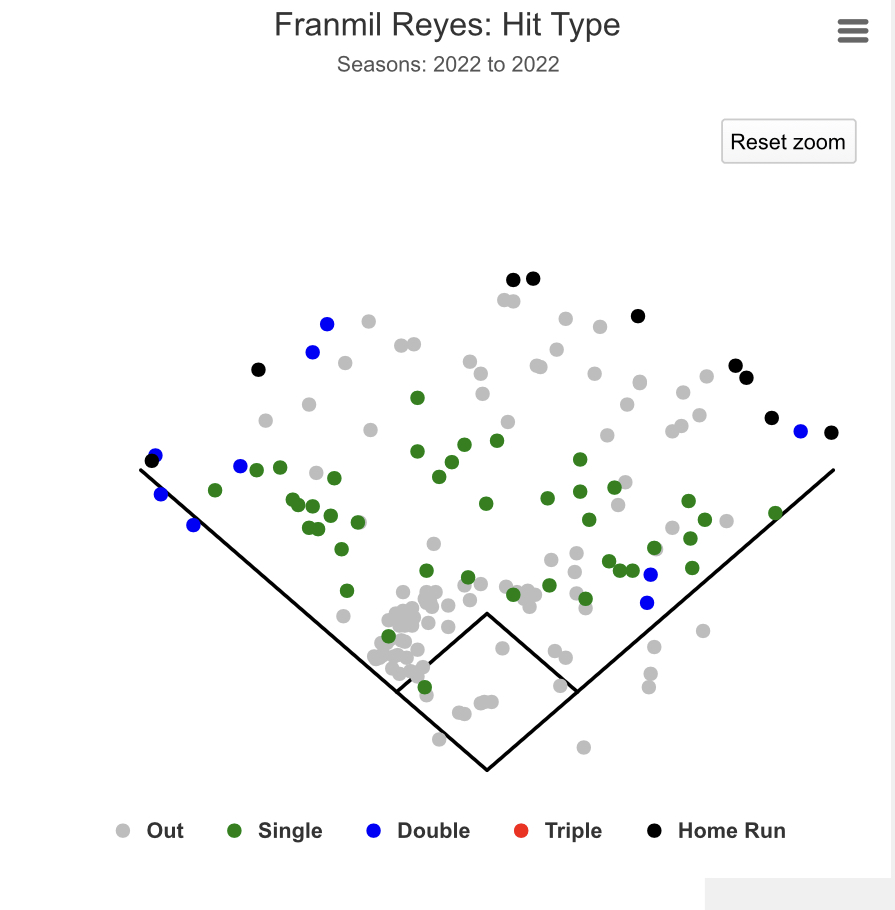 As you can see in the image above courtesy of Fangraphs, Reyes hits most of his batted balls to the left side, so a shift makes sense. So why am I complaining? Because there seems to be a disconnect between the pitch-calling and the defensive shift. Barrera should’ve called for inside pitch to play into the shift. Sure, the Nats may have been hoping he’d roll over on the outside pitch but I feel weak contact to second base would’ve been the more predictable result, which is what happened. More often than not, a pull hitter is either going to swing and miss or get weak contact the other way. So the Nationals should’ve gone to a normal infield placement rather than remain in the shift.

Again, as Nick mentioned to me, because it was a breaking ball, they may have remained in the shift in hopes that Reyes would roll over on the ball. But is it possible Barrera made the wrong call in the shift? Or that the Nats’ shift analytics are behind and they didn’t want to abandon the shift with 2 strikes? Maybe. I used to think that a baseball team’s analytics department was smarter than me and knew what they’re doing, but recent history suggests that may not be the case with the Nationals.

Either the Nationals are dumb and behind the trend or Tres Barrera is young and didn’t call the pitch to the shift properly due to inexperience. I’d much rather it be the latter than the former but who knows. If it’s the former, then that’s a problem. As Ryan mentioned in his article on player development last week, good defensive positioning would greatly benefit the young Nats pitchers.

Teams like the Braves have been adjusting the shift with two strikes and that may be just the beginning of a trend. Generally weak contact is the most common result in a 2 strike count so the fear that a hard hit grounder through the hole is less of a threat. But it will be interesting to keep an eye of the shift around the league with two strikes moving forward, at least until the rule changes. Either way, it was an unfortunate base hit to give up, and for some pitchers (cough* Strasburg* cough), giving up a hit due to the shift can be psychologically damaging. Lucky for us, it was no problem for Josiah Gray as he went 6.1 innings and only gave up 2 runs before the bullpen blew it against the Cubs.

Why Everyone Should Root for the Baltimore Orioles

Why Everyone Should Root for the Baltimore Orioles