Adley Rutschman is the Second Coming of Buster Posey

On May 29th, 2010, the San Francisco Giants called up top prospect and catching phenom Buster Posey for a permanent spot on the roster (he’d been called up the previous September for some meaningless AB’s). The Giants were 25-22 and third in the NL West. Bengie Molina, a pretty good defensive catcher, was struggling to hit for power and the Giants needed a spark. Buster Posey was ready, so they called him up and the rest is history.

The team went 67-48 after calling up the phenom and Bengie Molina was traded to the Texas Rangers midseason. Posey went on to win National League Rookie of the Year and the Giants won their first World Series since 1954 when they’d been the New York Giants. That was the first win of three World Championship in 6 years for San Francisco, with Buster Posey leading the team for all of them. There are no more captains in baseball, but if there were, surely Posey would’ve been the Giants captain almost immediately.

On May 21st, 2022, the Baltimore Orioles called up top prospect and catching phenom Adley Rutschman for a permanent spot on the roster. The Orioles were 16-24 and last in the AL East. Robinson Chirinos was the primary catcher and was struggling offensively and Adley was finally ready for The Show. The rest might be history. Sound familiar?

The O’s have gone 56-41 since the call-up and are still within striking distance of an improbable AL Wild Card berth. Keep in mind they are at the very least a year ahead of schedule in terms of competing and were probably two years away on paper, realistically. But the call-up of Rutschman has rejuvenated a beleaguered franchise that has been the laughingstock of the MLB since 2017 when they embraced the tank.

Whether you liked him or not, Buster Posey was a special player because of how good he was as an all around catcher. He could hit for contact and power while providing gold glove defense. He was the leader on that team from a young age and we’re seeing a lot of the same things from Adley Rutschman. Let’s compare their rookie numbers below: 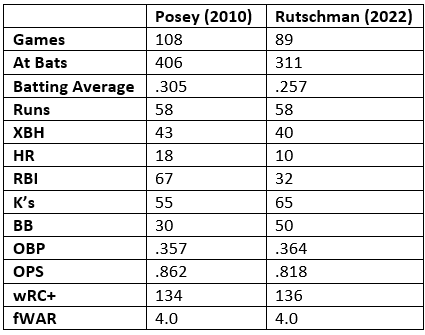 Now you can see that Buster Posey does hold the edge in most categories but it’s still pretty close and yet Adley has played 19 fewer games and had almost 100 few AB’s. In fact, despite playing in 19 fewer games, Rutschman matches Buster Posey’s rookie season in fWAR and exceeds it in wRC+. Like Buster, Adley is a special player because of his all around game in baseball’s most important defensive position.

And unlike Posey, Rutschman hasn’t had the benefit of catching prime Tim Lincecum, Matt Cain, and Madison Bumgarner. He’s handling an overachieving but very young Orioles staff that includes their top starting trio of Dean Kremer, Austin Voth, and Kyle Bradish. He has excellent blocking skills and a terrific arm behind the plate and is one of the best pitch framers in the league. What he’s done since arriving in the majors and the impact he’s had on the Orioles’ franchise can not be overstated.

Adley Rutschman is arguably already the best catcher in baseball, even with Will Smith’s offensive output in LA. Only JT Realmuto and Sean Murphy have a higher fWAR and they’ve each played roughly 20 more games than the rookie. Crazy enough, that might not be what wins the AL Rookie of the Year award as Julio Rodriguez has been special out in Seattle, but writers may take into account what Rutschman has done beyond the numbers. Like Posey, he is a generational type catcher that, if healthy, should be near a Hall of Fame level. He’s going to be a blast to watch for the next 12-15+ years.

No, CJ Abrams Should Not Focus on Trying to Hit Ground Balls